I never played much arcade games, but it's interesting to research them because in many cases a franchise started out as an arcade game and later got ported to consoles and computers. It's fun to see how sprites and gameplay looked before it got (in some cases) downgraded.

Athena is an old arcade game by SNK. It's (afaik) the first game to feature the character Athena (a somewhat well known fighter game character). There were a few ports of the game, including one for the NES. The game kind of reminds me of Xexyz in how it has a fun atmosphere, unrealized potential, a shitty jumping mechanic, amongst other things.

The most awesome thing about it is the (arcade) intro where the heroine falls down a chasm and loses her dress. Someone remarked that it's like Metroid backwards. You start in a bikini and find armour later on. The armour and weapon upgrades are actually shown on the sprite, but the animation for the weapon swooshing kind of sucks. Some of the enemies are pretty sweet, with crazy deer knights and brain-in-a-jar soldiers in the ranks. You can destroy the environment (blocks) with weapons and Mario-style headbutting, and there's a bunch of mystery items hidden inside some blocks.

There are two related games which need to be mentioned: Psycho Soldier, which I know very little about (need to research). Apparently the main character is an incarnation of Athena. Then there's Crystalis, which was know under the significantly more awesome name God Slayer in Japan. It had an awesome title screen. It was developed by SNK too, and featured some enemies and characters from the Athena universe. Last, there was a sequel to Athena for the mobile phone, but it's really obscure.

Below are some pencil thumbnails which are pretty unprocessed. Some of them are more like notes which I made while playing the game than actual drawings. I just scanned the sheet and arranged the candidates with some potential onto lineup guides. Usually as I color and refine the designs needs to be re-evaluated against each other and a lot of them have to change significantly so that they'll work together to present a whole.

The game does a lot of head swapping for the enemies, so I thought I'd try to vary the body types a bit to avoid that. 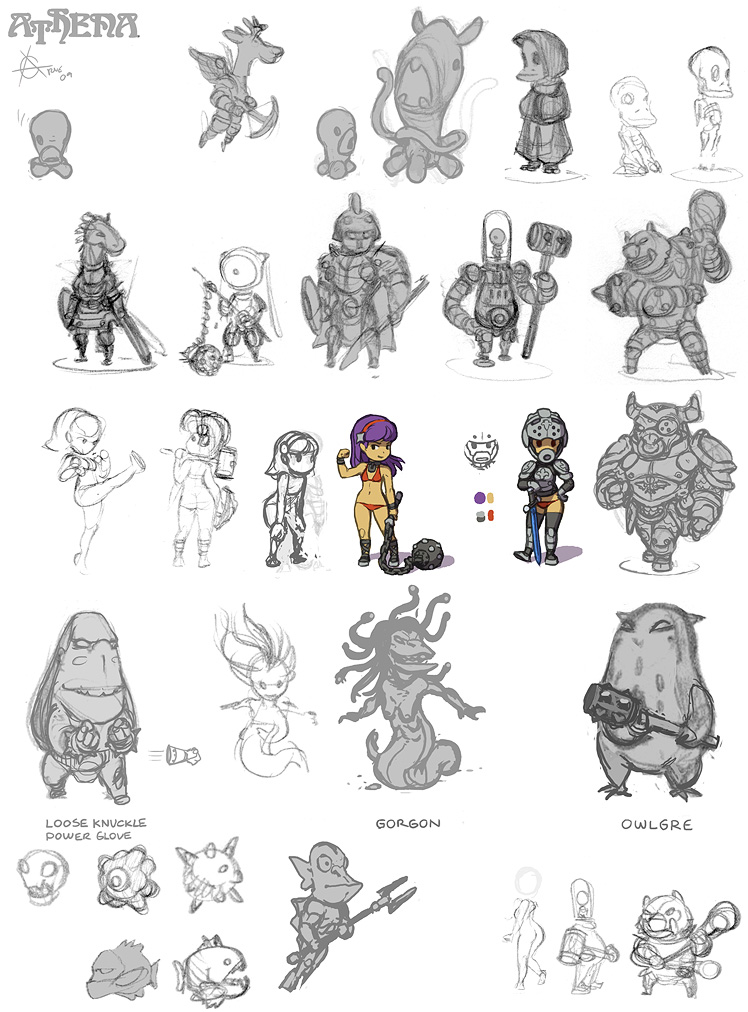 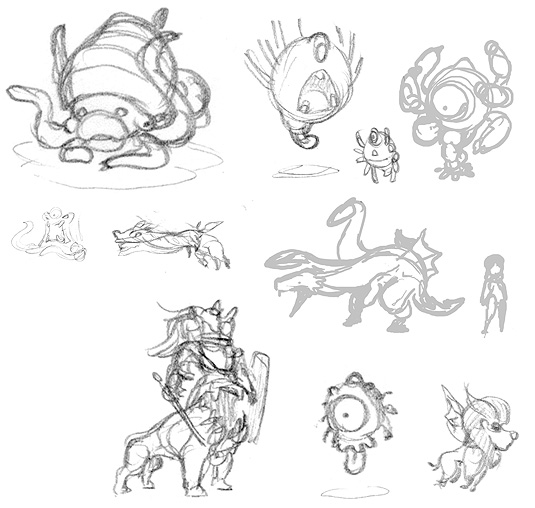 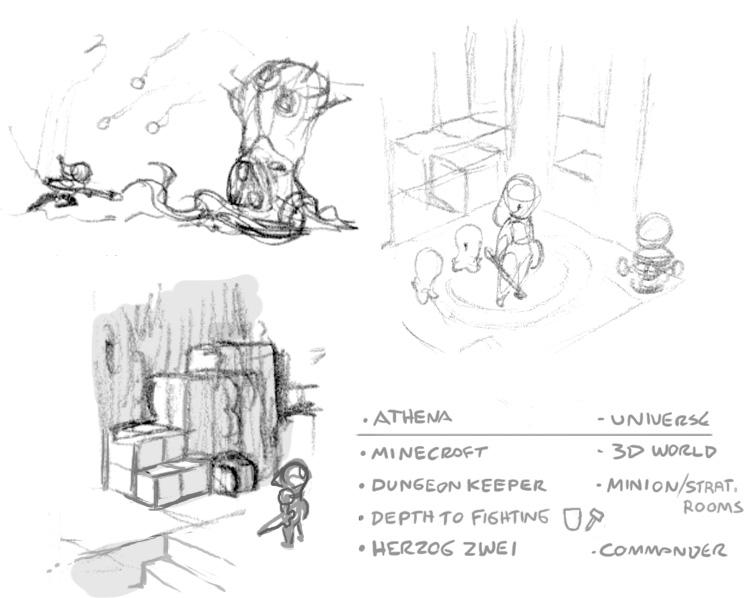 Wonder Momo is a strange game because you actually play an actress playing the heroine in front of an audience. The lewd photographers in the audience will stun you if they manage to take an upskirt pic.

The enemy designs seem to have a retro scifi feel with the clumsy men in rubber/robot suits. I like how things look more strange than cool/menacing. I think I'm gonna redesign the heroine's suit to look something like Kamen Rider's. Maybe she's got several forms. There's this super heroine which can transform into a ladybug, and another who turns into a fire post or something. That's a direction I want to explore.

Many of the pencil thumbnails were drawn quite small and are just some kind of starting point.

It would be fun to experiment with faster animations which freezes at the delivery/impact point. That's how the guys in Power Rangers etc, move. Also, (like takkurumoe) perhaps you have to hit the air in front of the enemies to damage them (and if you actually touch them you just hurt yourself). To continue along those lines, enemies could actually do the take-hit animation when the player has started the move (before the hit), when taking the hit, or a bit after taking the hit. This would simulate poor timing by the actors.

Actors playing dead would stay on stage. In the original game they disappear but that kills the immersion, especially in this case since it's just actors. Actors appear on stage by elevators from under the stage. The backgrounds would be scenery flats. Maybe there's a giant scale set too, with small skyscrapers, giant monsters, giant robots, etc.

The intro story could be played on stage too, with actors who does not know their lines or slow to deliver.

The gymnastics ring does not work too well since it has no effect outside of the screen and takes a lot of time to return. I'm thinking it might be better to have it go off stage so the audience can toss it back up.

Enemies do not attack during transformation scenes!

Some kind of headband could be used as a transformation device, it would work with forehead V-shaped stuff.

I think some of my designs are not silly enough, so I might silly them up or move them to a different 'Tokusatsu' project. I've been watching Power Rangers for research purposes. Jungle Fury had the best enemy designs I think (the Phantom Beast Generals), and Operation Overdrive had the best mechanical designs (no cheap CGI Zords) and maybe a better story too. Didn't like RPM much. 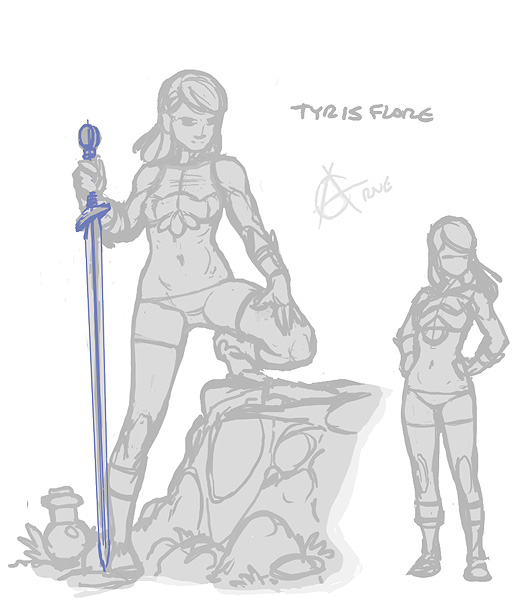 Random Pinup. did a bit redesigning of the armour (bikini). 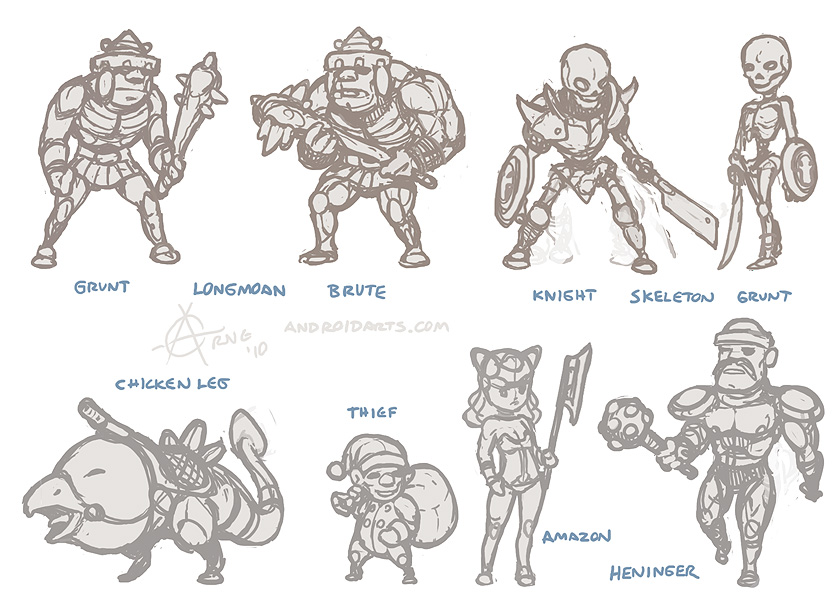 Golden Axe rough sketches. Needs a bit of color to become identifiable though.

Alien Syndrome is an old Arcade game based on Alien. There's a few ports and sequels, but the arcade version has these odd pastel colors* which clash with the horribly-mutated alien theme. I thought it would be fun to play around with that. None of the sequels did.

* Note: I may be wrong about the pastel colors. Like Contra, the game looks quite bright when emulated (with the black lines popping out). I think the arcade cabinet monitor was put behind a dark toned glass. As a result the emulated stuff looks too bright. Still, the game is kind of cute and not really scary visually.

I can't say I'm excited about the game though. There's an endless stream of aliens which just teleport in from the screen edges, and then there's a stressing time limit. Time limits are a sign of weak game design I think. They seem to be used when there's no practical reason (within the game world) for the player to 'move on' or whatever, so an artificial incentive (God is counting) is used. This kills immersion for me, and I'd rather see a properly devised foundation for the gameplay instead. RPGs irks me the most, especially MMORPGS where the primary game mechanic isn't to keep players entertained, but to keep them playing & paying. This results in a lot of stupid rules like "You have to be lvl 40 to wear these boots because otherwise someone could just give them to you when you're lvl 1". It's like some cosmic nanny is slapping my fingers. 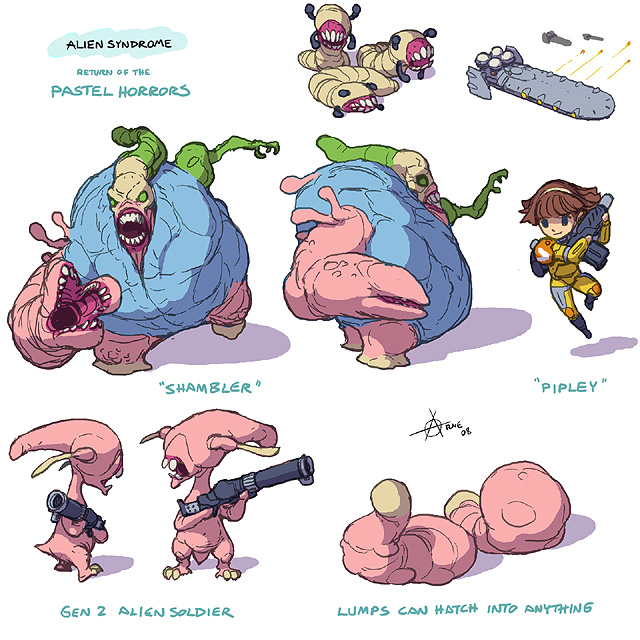 It appears I've written more about this game:

Alien Syndrome is an Arcade game born in 1987. It's a top-down run and gun game based on the Alien movie. The game itself isn't much to hang in the Yule-tree, but it does have one thing going for it. The art style clashes with the scary alien theme in a humorous way. All the aliens are drawn with happy pastel colors and don't look very scary at all (* see note above). Unfortunately all the sequels and ports have completely ignored this defining aspect of the game and went for a more serious gritty look instead. What a pity.

The gameplay consists of searching for comrades (other humans) who have been stranded on various space ships. Each spaceship is like a little maze, and you have to find a number of comrades and reach the exit. When you pick up a comrade (by touching) they will just disappear. Maybe they're beamed off the ship. They're also immune to the mean aliens while the player is not. The player can not leave the ship until a number of comrades have been saved. There's a time limit which stresses the player to move along. The aliens just teleport in, and although only a certain number of them can appear on screen at once, there's no shortage of supply.

Certainly, the game is not meant to be realistic. The use of abstractions can be handy when trying to deliver an arcade experience. However when devising an simplified rules of something that is realistic, it's easy to start accumulating exception rules to patch things up. In the case of Alien Syndrome you have infinitely respawning aliens, and the player has infinite ammo. This creates a scoring problem. The player could just stand and accumulate easy points all day (and hog the arcade machine). To patch this problem a timer was introduced (a self-destruct, time bomb or whatever).

Robotron aside, I don't really care for highscores, and a timer not only stresses me, it kills immersion too. It's like something outside of the game is counting and checking up on me. It's a bit like not being able to put on high level boots in an RPG because I'm low level and using the boots too early would break the (poorly devised) game.

If Alien Syndrome had been for a modern PC, a lot of fun stuff could be made. Finite ammo, health and pickups could keep the player moving about looking for loot. If the alien reproduction is integrated into the gameplay then various tactical situations could emerge, such as destroying the queen, food supplies, blocking off paths, etc. The larvae could develop into different things depending on what food they find. Maybe the aliens use smell trails like ants do, and the player could manipulate those. The Comrades could barricade themselves in, engaging in firefights with the aliens, holding until the player arrives. The missions could vary in nature and the solutions could be improvised.

Air fortress has a similar character, it could be a homage. If I understood it correctly, the female protagonist from Baraduke later married the DigDug guy. It came out in 1985, so it predates Metroid with a female heroine in a yellow space suit. Baraduke plays a bit like Section Z, but is linear. The huge weapon has a significant recoil. 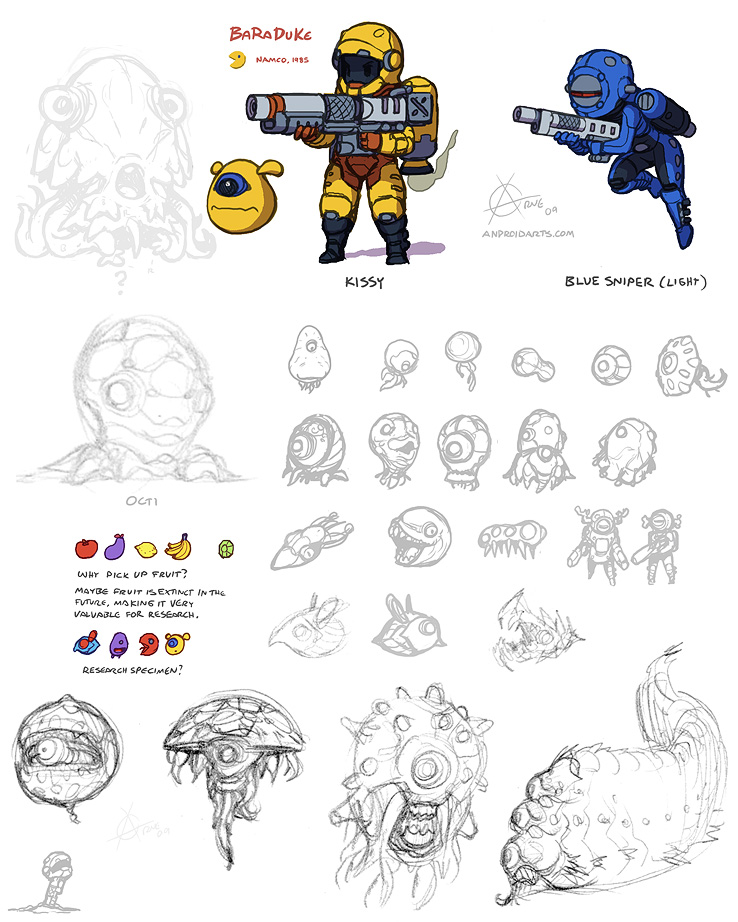 Yars' Revenge is on my top 5 best games of the Atari 2600. The game came with a super-niceshort comic. Today games come with no manuals, health warnings in 93 language, and immersion breaking ingame tutorials. Well, to be honest, some editions come with figures and art books, so it's not all bad.

Where were I? Oh, yes, I made some simple doodles from a few game I ran into on YouTube. GORF is interesting because it's a bit of medley of several classic old shooting games. I always preferred Balloon Fight over Joust, even though riding ostriches and vultures is pretty awesome.