I came up with the cyborg eyes back in around 1991. I think it's a rather strong design, so I decided to expand upon it using my current skillset.

Recently, it occurred to me that I could call the cyborg eyes 'Eyeborgs', but it appears others have had the same name idea, as it's pretty obvious one. There's even a movie coming out called Eyeborgs which features little camera eyes walking on legs, although I doubt that they got the idea from me.

I also recently encountered a Japanese cartoon called Chicken Takkun (from 1984) which features a character with the same leg anatomy as my cyborg eyes, although it's unlikely that I drew any inspiration from that. I grew up in Sweden and they only aired disturbing eastern european cartoons here.

The pilots are protected by both an armored sensor capsule and a shielded clear s-metal canopy.

The Archetype faction is since long extinct, but their basic unit types are still in use by factions today.

The Searchers are explorers. Unlike the other combat oriented factions, they are focused on searching for an answer to where they came from, and often seen exploring Archetype remnant sites. Their range of military units is limited to that of the Archetype units.

Somewhat of a nomad faction with a preference for hit and run tactics. They often steal rare supplies during raids.

Due to their attention to defense and fortification, this faction has secured the most territory of all factions. They rarely carry out larger offensives, instead they move in after a battle where two other factions have worn each other out.

Easily aggravated, this faction makes frenzied attacks using mainly close combat units - an inefficient tactic which has marginalized the faction. Still, the unpredictable nature of their attacks has won them a few surprise victories on the cave and jungle worlds in Cluster 7.

Using unorthodox tactics and unit design, this faction is a bit of a wildcard.

I'm generally not a fan of chicken mechs (MechWarrior etc.), but there's something appealing about the (relative) realism which they offer. It would be interesting (a challenge) to take that realism further, replacing the game'y weapon mechanics with auto aim with leading (aimbots, if you will). I have tried out a bunch of mecha sims and didn't really enjoy the slow turning turrets, wrestling with a manual aim, and hammering away slow moving plasma balls until the enemy goes red and does the death animation. Same goes for many spaceship dogfighting games.

The real joy for me lies in strategy and psychology. Managing the mechs, my team's placement in the terrain, setting up shields, running silent, sneaking in and get the first shot, deciding which body part to target which what weapon, etc. Even with faster bullets and aimbots, there could still be some dodging involved as bullets often move under 1km/s.

Mech customization is a tricky design question. When every mech can be customized, it's harder to read the tactical situation you're in, especially if custom gear doesn't alter the appearance of the mech. In X-COM, when you see a Chryssalid, you know it will be fast moving and hit hard in close combat, so you can plan for that.

There are a couple solutions that I can think of, top of my head:

I think, if the squad control is important, like it is in X-COM, there should need to be mini cameras for all squad members. The old Space Hulk game had mini views for the other squad members. Seeing what the other guys are doing not only helps you keep an eye on the tactical situation, but it also makes you bond better with your team. An external camera showing the mechs of the team mates (along with their portrait) could help this further. Also, if there's an aimbot mechanic going on, even the player's mech could be shown using an external camera.

The plot could integrate an explanation why the playfield is barren (if it is). On Mars, an alien vault in a ruined temple sends out a signal, and human colonists show up to investigate. They push some buttons, and a bunch of massive mechanisms comes to life. One of the mechanism terraforms Mars rather quickly. Grass starts to grow within weeks, but trees would take longer of course. Also, there are not a lot of buildings around yet.

Then a bunch of aliens show up, and you technology from alien vaults and/or aliens. A computer goes mad, and now we have the three types: Humans, Robots, Aliens.

2011 Edit: Another plot idea: There's a huge catastrophe, such as a gamma ray or something killing all life on earth. Humans aboard a space station find a way to reset matter to a previous point in time, locally. They attempt to reset the earth back 10 years, but fail and reverse time 70-200 million years. Whatever plan that they had fall apart. Humans are rare, and begin to travel in armoured vehicles. Then the mech wars begin. And there are dinosaurs. 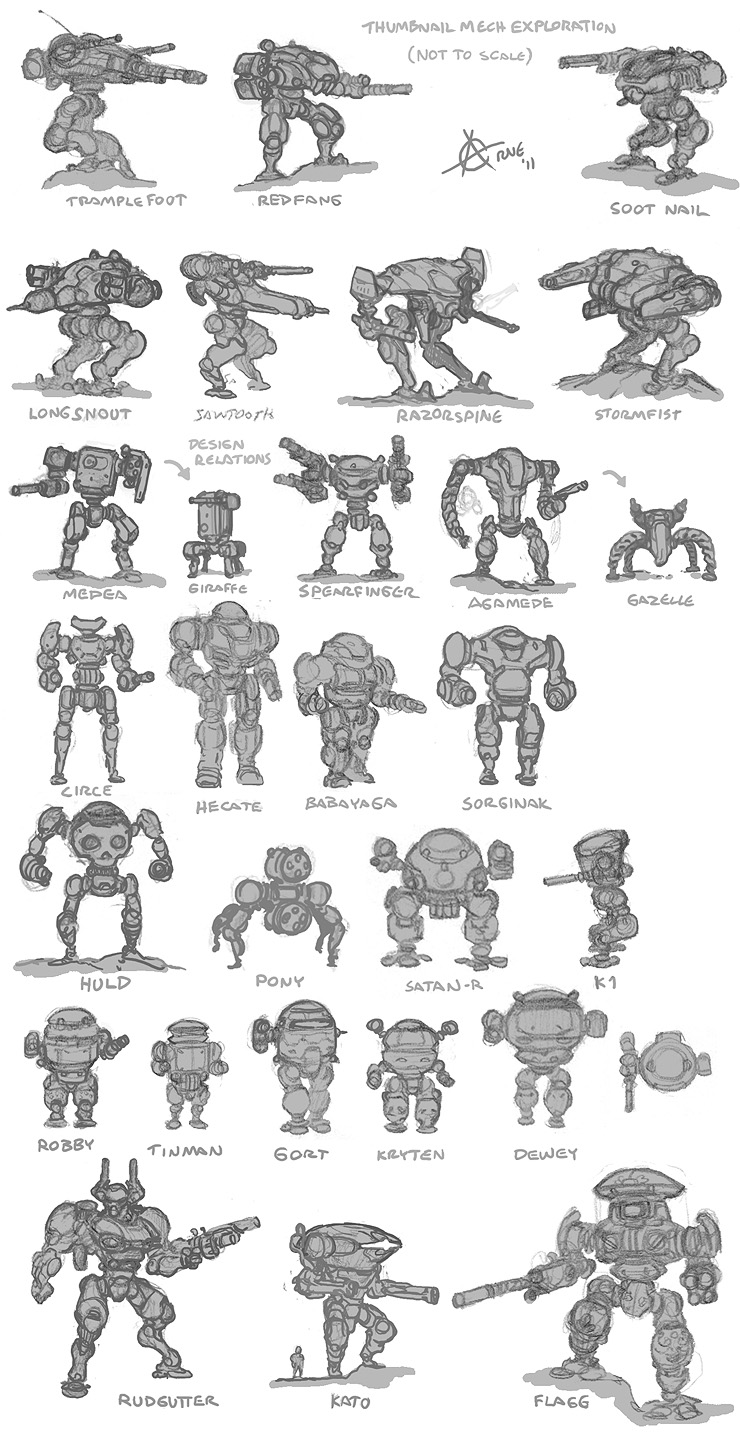