Dragon Slayer 1 is a very early action RPG by Falcom. It was released for various Japanese computers, such as the PC-88 and MSX. I have played the gameboy version a little.

While DS1's mechanics can be puzzling at first, the game features a fairly standard RPG hero with the usual stats. Combat is done by simply bumping into monsters, or more often, involuntarily having droves of monsters gang up on you. This type of mechanic has been used by other early computer RPGs, such as Tower of Druaga, Hydlide and Ys.

Dragon Slayer 1 on the Gameboy, displayed with a
custom palette. The monster design varies a bit
between the different versions of the game.

However, DS1 is also a fairly sand-boxy block puzzle game. It's not a puzzle game in the sense that you're given specific puzzles to solve. Instead you are given pretty much free reign to move things around to your advantage. Every wall can be moved or destroyed. Certain items give you special powers, but you can only carry one at a time. Creating local stashes of stuff is a good idea. Ghosts are constantly swapping items around so you can't count on a key item always being at a certain place.

On top of this, the game is without mercy. Aside from being incredibly frustrating, it's also refreshing in a weird way. You're allowed to mess up and put yourself in an unwinnable position, but there's also no nanny to stop you if you're being brilliant. Some games only allow you to be brilliant if you're being brilliant in the predefined way, and will block off everything else with invisible walls, etc.

It's a tough game to get into, and mostly just very frustrating. Still, I really like these early games where they were still experimenting. Modern RPGs, perhaps including the later ones in the Dragon Slayer series, have gravitated towards a sameness.

If you look at just DS1 alone, it's not really clear which direction the game could have gone in. It has some elements of Sokoban, and the forth game in the series did indeed go in a side scroller block puzzle direction similar to Solomon's Key. I intend to take it in a slightly different direction, expanding on the resource gathering aspect of the game, injecting a small dose of RTS game mechanics (and Dwarf Fortress? Minecraft? Lord Monarch?). Well, I'll (try to) keep things somewhat simple to start with.

I'm thinking HP, Att, Def values should be 100 at start and reach some 600-ish later on. I'm not a fan of huge level differences. I like being able to waltz into a difficult area and at least poke around a bit before I die. Anyways, if the stats start at 1, then it's harder to make subtle increments. 100 is still small enough to be easy to handle as a number by the player. It is of course the combat mechanics which dictate how 100 is different from 600.

The home and other buildings

In DS1, you can push around your home, which is the size of a tile. It's a bit silly, but fun in a way. I was thinking that perhaps it's more realistic with a larger static home and a home portal (or several) which can be pushed around. Not all portals lead back to the home though.

Returning to the home (I might call it Soul Lair) instantly replenishes 50% of Max HP. Spending time in the home will slowly replenish the rest, but time is precious since the monsters are up and about.

Coins can be used in a store to replenish HP, and even replenish HP beyond the Max HP for an extra cost. The might also be stores which trade with items (buying and selling).

The following items can be collected and carried around in large quantities, perhaps not just by the player.

Only one weapon can be carried at a time. The player can drop and pick up weapons anywhere in the playfield. Multiple copies of these weapons can lay around on the battlefield, enabling the player to build up local stashes, just like in DS1.

Eventually the player will be able to use magic. Magic uses mana potions. Some weapons enable extra magic spells, but most spells can be cast when holding any weapon or item. I don't know how these spells are acquired. Magic level based, or scrolls.

Miss and hit anim frame, blood, clank and swoosh The player can toggle between an offensive and defensive stance. To save time, walk animations does not show which stance is used. The player settles into it during idle and combat. Critical hits can only be scored against those with an open offensive stance. A critical hit is recognized by a high damage and a special sound.

I'm not sure how different movement speeds would work. Tower of Druaga probably solved that.

The monsters I've drawn here are from the PC88 version of Dragon Slayer 1. I liked what Diablo did with hero monsters, because it breaks up the monotony of 20 orks attacking, 15 orks attacking 22 orks attacking. If there suddenly is some rare character in the mix, it makes the game feel more boundless.

Hero monsters could grow stronger with time and have individual stats, unlike the cloned legions of regular monsters. I think the common monsters needs to be very similar stats-wise (3% variation or so), because the player should be able to predict quickly read the battle landscape and make informed tactical choices. The hero monsters are rare 'jokers'.

I haven't drawn any hero monsters yet, but they'd be a larger version of a normal monster. Oh, I also want to draw some enemies from DS2. The MSX version has such cute sprites. Many of them probably went on to influence other famous games.

In the original DS1, monsters appear out of tombstones. If the player kills an monster, a harder monster will appear from a tombstone. This is a very simple mechanic, and I thought it would be fun to add some depth to it. I've always liked monsters with a bit more life in them, so I was thinking that the monsters should have an agenda aside from being mindlessly roaming zombies.

Just like the player can drag power gems back to the house, the monsters can sacrifice power gems to upgrade their altars. By doing so, they can summon higher level monsters. If the player dies, the player body (or the head which is easier to carry around) can be sacrificed as well. This works as a form of death punishment. Die too many times and the monsters will grow too powerful.

Yes, it's a form of reinforcing feedback that might make the game impossible, but DS1 doesn't care about being impossible.

A flame above the alter will indicate its current level. Several monsters will have to spend time with a sacrificial ritual around an altar to upgrade it. Perhaps the player can destroy or downgrade altars.

This monster leveling mechanic is similar to an RTS game where both sides gather resources and build armies. It pressures the player to actively disrupt the activities of the monster.

Instead of traditional difficulty levels which scale damage and stats, the difficulty level is set by choosing which map, or, uh, Phase Scape to play (maps are called Phases in DS1). For example, a hard Phase Scape may have less beneficiary items available, no player respawn item, and monsters might have more resources available to them.

I was planning to just do a complete gfx set and let someone else do the code. If I keep to my Legacy of Hydon isometrical style, I should be able to paint stuff up pretty quickly. However I got curious about programming tile movement with an analog flair, and made a few tests.

Right now all movement is synced, so everyone moves at once. The sliding between tiles effect is merely graphical. The characters and walls are all obstacles which instantly can move from one cell to another, at certain times. Doing so leaves frees the cell they were previously on. Since I update the characters in the order that they appear in the list, some might get moving priority over others. Perhaps the once which don't get to move the way they wanted should be put into a second chance list, I dunno.

It might be a good idea for moving characters create a temporary placeholder thing with an angle trait behind on the cell that they are leaving. This way graphical overlaps can be prevented when for example a guy walks into the spot which is seemingly empty, but it's not because the guy who left it just started walking. However, a character who has the same incoming angle as the character leaving the cell can trample over the placeholder (lo moving queues and block pushing look good). Other characters coming in from the side must wait for 'half a tile' (until the temporary placeholder disappears).

My system now sort of works with de-synced movement (characters can move at any time they want), but I forced everyone to start moving at once and arrive at the same time, because that will work better with the combat system that I had in mind. 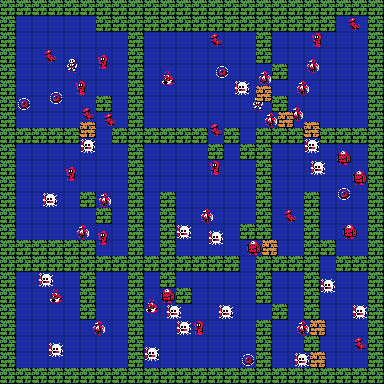 Pretty much the same code, but I added some graphics inspired by the the PC-88 version for kicks. Draw order problem sighted. I'm not sure how this issue will manifest in isometric mode. It's probably not a huge problem to solve, anyways. It's a drawing problem so stuff outside of the screen won't have to spend time on it at least. 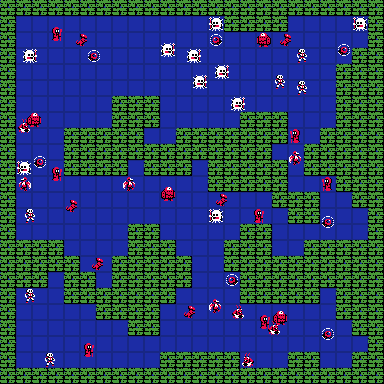 Eventually the monsters will push things into tight clusters. Most or all monsters won't be able to push blocks at all in the actual game though, only the player can do that. Ghost thieves will fly over blocks (or though). 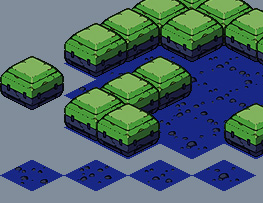 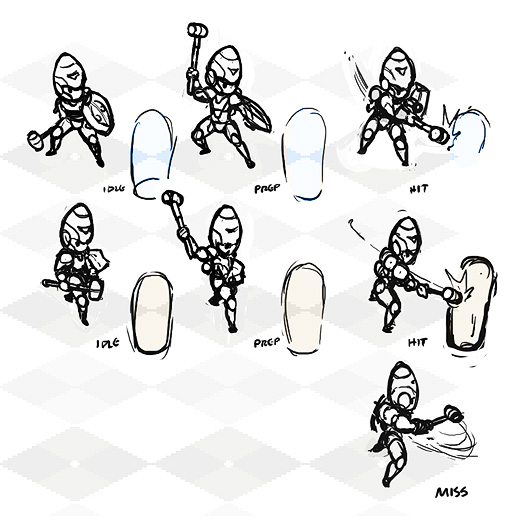 Since I don't want to paint a lot of frames, I can't move the feet a lot. Here I'm experimenting with foot placement.