I remember playing Marathon a little on a Mac long ago, but I ended up playing Dark Forces more instead, for now unknown reasons. Marathon is an early first person shooter (trilogy) developed for the Mac by Bungie. At this time, FPS engines were sort of just straddling the fence, going from 2D and 3D. I've heard that Marathon uses some kind of portal engine, meaning, the maps are made out of rooms which have connections to other rooms, allowing a wily designer to make impossible structures.

Marathon makes heavy use of "go somewhere, push button" mechanics for the level designs. But, unlike many other FPS games of the era, Marathon has a story and world description which is accessed through the consoles scattered around the various levels. It could perhaps be argued that the player is just used as a way to tell the story of the main character, the AI "Durandal".

NPC soldiers called BoB's, and floating tanks occasionally join the player in battle, so there's a cool NPC coop thing going on sometimes. Most of the enemies and items in Marathon are colorful hand drawn billboard sprites (2D images), which puts it in contrast to FPS'es with a more gritty/realistic inclination.

A large skirmish between Pfhor fighters, massive Drinols, Bobs and MADDs. Note the polygonal shadow fields. This is a screenshot from the free AlephOne version of the game.

Early summer 2011 I was contacted by Bungie who wanted me to do a poster for their 20th year anniversary charity event. My art director was Lorraine McLees, someone whose work I was familiar with since I did a (rather terrible) Oni fan-art piece a decade earlier. As usual when working with a large company, they were very professional and helped me with reference and answers to some (prying?) questions. I'm always a bit quirky to work with because I obsess about the lineage and relation of creatures and characters.

I started looking into their other games, like Minotaur, Pathways into Darkness, and Desert Storm. The idea was to do some sort of mixed character group shot like Capcom often does. Eventually we settled on using just the Marathon characters. Unfortunately I'm terrible at doing interaction between figures in an environment, so the final result was a kind of jumble of figures standing around. I tried throwing in some text to make it more of an anatomical poster, but I was late and didn't have time to come up with clever annotations so the final went without text.

The three Marathon games share many of the enemy designs, but they do change appearance a bit. For example, the eyes on the Pfhor guys were flipped from ('.') to (.'.). Apparently the lower center eye looked too much of a clown nose, so it was changed for the sequel. Personally, I felt that having the center eye in the "enlightened position" (forehead) made the Pfhor too human looking so I insisted on using the original arrangement.

Greeks aside, Marathon takes its name from the spaceship UESC Marathon, which is actually a conversion of the Mars moon Deimos. There are not a lot of pictures of the exterior of the ship, but I wanted to include it as a little easter egg. Deimos is rather asymmetrical, and I wanted something a bit more structured and egg-like, so I imagined that machinery had reworked the surface a bit, hence the little panel/field lines. Deimos has a lovely color structure, so I kept that. A Death Star trench suggests some kind of main plane at the center, but it's entirely my construction. The crew of the Millennium Falcon would have been even more confused if they had approached this ship.

There are probably little masts and view ports all over the surface. It would have been nice with a mission taking place in a spacesuit, traversing the strange altered moonscape to get to a new level. The thing is over 20km though.

I'm not sure how the final printed image looked exactly so here's my earlier version with some placeholder logos and fake annotations. While I did have a 11m big Battalion Wars image displayed for E3 at one point, this Marathon poster is by far the largest file I've worked with. The 500mb work file almost overheated my puter in the summer heat.

Each character was drawn on a separate canvas. I used my regular work method, consisting of a rough layer, line art layer, flat color layer, shadow layer and finally layer for painting on top of all that. When finished, I flattened, did BG transparency and plopped the figure onto the huge poster canvas where I tried to find a home for it. While the figures were relatively painless to draw, I was a bit overworked that month and developed some wrist problems. I actually programmed a micro-break timer to help me avoid such issues from here on.

These were done in 2010 using pencil and/or Photoshop. I played around a lot with extrapolations of the existing designs (or interpolations between them).

There isn't much art around of the player character (an unnamed "Cyborg"). I managed to find some in the manual, and a few pieces by Craig Mullins. I think it's fun with the swollen helmet and visor, so I played that up. The M.A.D.D and BOB (Born on Board) are friendly NPC characters. The VacBobs are perhaps a precursor to MasterChief...?

The Pfhor are the main antagonists. For some reason some of them insist on using close combat weapons, enabling you to kill them in droves with your flamer, flechette gun, SPNKR, etc... unless you punch them to death with your bare hands that is. Well, you're a state-of-the-art military cyborg so you can do awesome stuff like that.

Some of these designs are my own and not from the game. The robot on stilts can be seen on a blurry screenshot of an earlier version of the game. There's only one type of hovering Juggernaut in the game, but I drew one with legs and a smaller variant as well. Some kind of black sphere acts as a hovering engine, it seems. I like consistent design language like that.

These unfortunate monsters have been enslaved by the Pfhor.

PiD was one of Bungie's earlier games, and it was released for Mac in 1993. Its engine is similar to Wolfenstein's, but it does angled walls and floor and roof casting as well. I haven't played it, but I did read a thorough Let's play.

Just like Marathon, it's a quite story heavy game where the player is required to pay attention and actively pursue information. There's still a lot of shooting though, with upwards 2000 enemies in the entire game. Limited ammo supplies quickly becomes a problem for trigger-happy adventurers.

I'm not sure if the scary, deceased atmosphere would work with a cute style. But, once the mind has immersed itself, the mind tends to focus on the events and ideas which are being communicated. PiD's graphics were not exactly scary to begin with, at least not compared to the gritty stuff that we see in Dead Space and the likes.

Also, the 3D view is surrounded by stat and log windows, which, rather than killing immersion, helps in communication and soon become an accepted part of the game presentation. I think text appearing in the 3D view itself is a bigger offender in that regard. "340 x 4 Multihit Combo!" and such things.

"Oni was here" - found scribbled on the exterior of an ominous pyramid. Was a quick in and out to get some home decoration items, it turned out. Little did she know that one particular item contained a hatchling of an ancient, dark god.

PiD has a few interesting features which sets it aside from most other FPS games.

PiD is an old game, and as such it exhibits some features common in old games.

It's impossible for me (and probably everyone else) to play/research a game without getting ideas. I wrote mine down so I can expand upon them later.

Alternative designs with a little more grit and different proportions.

I think there's a cheap way to do 3D walls in a simple raycasting engine. Instead of drawing the wall slices (columns) right away, we store them in a buffer, along with the ID of the wall that was touched, and we also make a separate list of the different walls touched. When the ray cast sweep is done, we go through the touched walls and calculate their angle to the camera because that needs to be consistent for the entire wall tile. This angle is simplified to a resolution of say 8.

An engine like Wolfenstein would just look at which texture a wall tile has, and draw that (and maybe pick a shadow version on the texture based on wall facing). But in our case each wall texture has 8 pre-rendered view angles (though the texture is still square). The view angle to camera (per wall) that was calculated before is used to pick the right sub texture (angle). I don't think switching angle in the middle of drawing a wall segment would look good, since the angle switch will misalign details, so that's why I suggest making sure the angle is consistent for the entire wall surface. Anyways, I think this method, whilst requiring more memory, is very affordable CPU-wise. 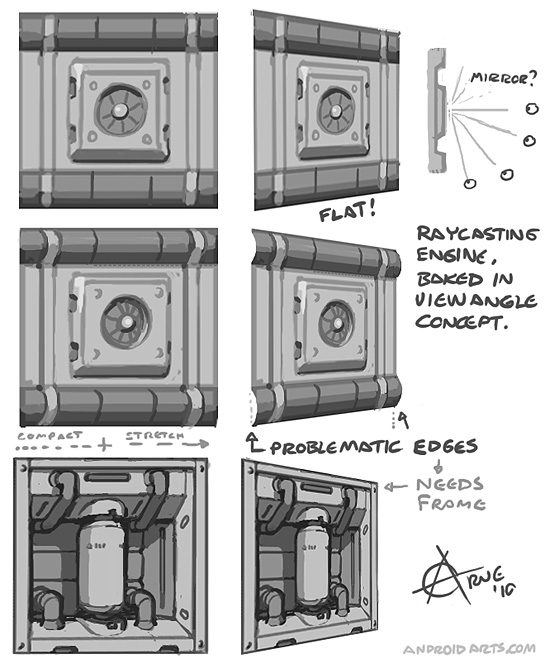 I'm not sure how all this would look in practice, and how many frames would be needed. A 3D program could of course be used to prerender all of the textures needed. But some clay, a mirror and a camera would also work. I mention the mirror because the textures might have to be symmetrical to save frames. The vertical edges (the frame) can't have any indents, like in my drawn example here. Of course, this only works in a primitive raycasting engine where you can't move vertically, and it won't work with floor casting.

Some mip-mapping with blur might reduce jitter for far away walls... but it's also possible that horizontal blurring could be used to make the texture compression of walls seen almost side on look better. Also, I think the farther edge of the texture will have to be slightly more blurry because of diminishing perspective. Here are some blurry photos of a clay+mirror experiment. Doing a clay-animation type FPS would be cool, but also rather time consuming.