Thoughts on Sonic the Hedgehog

I don't know if Sonic even works as a game concept. I always thought that it felt very claustrophobic due to its speed. It's contradicting itself with the speed reducing obstacles and exploration elements.

I liked how the first games looked though. The robots and rescued animals are cute and the levels feel tangible and colorful. The Sonic design illustrates how mixing unusual ingredients can work to create something more memorable. I think a good design should be both familiar and strange. Blue cartoon hedgehog with punk spikes? Imagine if Sonic had been brown-gray and had more regular hedgehog spikes. Imagine the Alien without the banana head.

Though... Nintendo somehow made the more generic Mario design work. Maybe that was more about persistence. Designing videogame stars and mascots (and a good game along with it) is not an easy thing. Ristar, Zool, Cool Spot, Pulseman... Even if successful, the mascot can still fail because it's on the wrong platform, a lack of sequels or loss of momentum.

Rather than doing straight "fan art" of the Sonic Badniks, I decided to paraphrase them. I like the idea of little animal pilots,though I'm not sure if that's what actually goes on in Sonic. 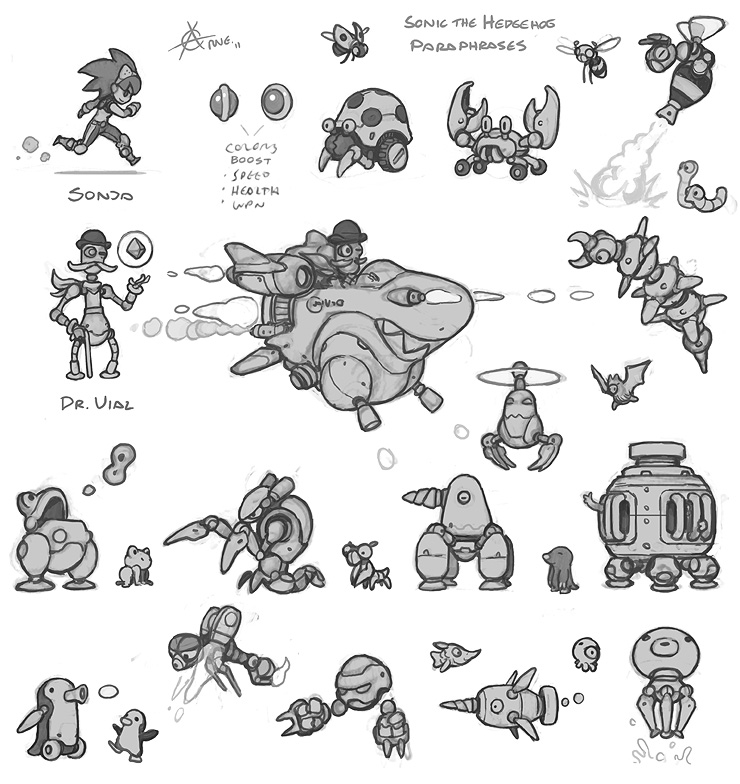 Brainfart: Like a note, the height of a ring-crystal over the ground determines pickup sound pitch (scale). Color determines instrument. Run through pickups, play a melody. This has probably been done in some game already.

Gameplay: Tribes, run-skiing back and forth between your base and the baddie's base? This way you'll learn the level, and can eventually plan routes which allows you to keep your momentum. I think avoiding parallax for the BG (or have some sort of positional reference points) can be spatially helpful. Scaling and/or scroll-ahead at high speeds can work too (and a mini-map / radar). Skilled players can pinpoint the position of other players using melody cues/directions. 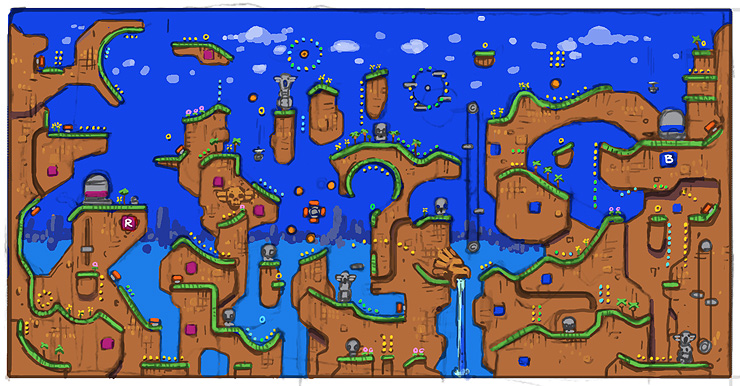 How about... Herzog Zwei style capturing of mini-bases (fill them with animals)? Deployables, such as springs, spike trap, turrets might be interesting as well. Tribes gameplay sort of relies on guns... and suddenly this project is 2D Tribes in Sonic skin.