I was watching a Final Fantasy Legend 2 / Saga 2 video let's play, and randomly also thought about Star Control. The FFL/SaGa series is kinda fun because it's such a mish-mash of humans, playable monsters, technology and fantasy. What if all of the creatures and aliens were from the Star Control universe instead of ancient mythology? How would such a game look and play? Can it even be made to make sense? I was in the mood to explore this.

It's sort of difficult to come up with a solid reason for the mixing all of the different Star Control aliens on a planet. My three main ideas are:

1. It's Arilou's mysterious experiment or 'ark' planet. It's hard to tell what the true Motives or powers of the Arilou are though.

2. It's Zex's zoo planet. But does he have the power to pull off such a thing?

3. An Ur-Quan science team (green?) is studying the potential of the involved aliens, coexistence, predisposition, and stuff like that. The team arrived centuries before present, abducted a bunch of aliens and life forms, left them with little technology on a backwater planet.

When the player's party is powerful enough to defeat a dummy quest/boss that the Ur-Quan had set up, the Ur-Quan left in a monitoring station is convinced that the aliens of this sector can become too powerful and dangerous to the Ur-Quan (something which it already sort of knew).

The Ur-Quan decides to purge the planet, ending the experiment, sending it's recommendation to the Ur-Quan HQ something. Perhaps the green one is now more convinced the black ones are right with their cleansing policy. The last report it sent just recommended standard slave shielding + technology reset (and battle thrall potentials).

However, the player's party gets a chance (enabled by an Arilou warping in?) to surprise the Ur-Quan stationed on the planet. It ends with the Ur-Quan killed, no one ever finding out about the planet, and a Chmmr and Mmrnmhrm starting the work on cracking the slave shield. To their help they have some of the Ur-Quan's equipment (which it attempted to destroy with its dying breath).

2013. I'm thinking these creatures can range from small and cute to larger and a bit meaner. It's possible someone chose highly adaptive creatures (some kind of super version of Darwin's Finches) and somehow spread them across the Star Control universe at some point. There aren't a lot of creatures in Star Control so I think extending the designs is a good idea anyways. I don't want to add random designs of my own.

It's important that these engage the viewer with their pose, but I suck at that and also don't quite know where the imagined player character will be. Maybe down left like in PokÃ©mon. Oh, I've found that squeezing the figure into a box makes it look more RPG-encountery. Something's off if I have a tail or a wing shooting off in some direction (breaking the box or leaving a big gap in it).

I like working larger and in color when doing the concept art. Maybe I can later re-color these in Gameboy shades and then index, scale down and clean up. Right now I have have the line art, colors and shades in separate layers so it's easy enough.

Cuties and Meanies. Babies and Warriors. Kittens and Lions. And I don't care bout you Pagewidth. 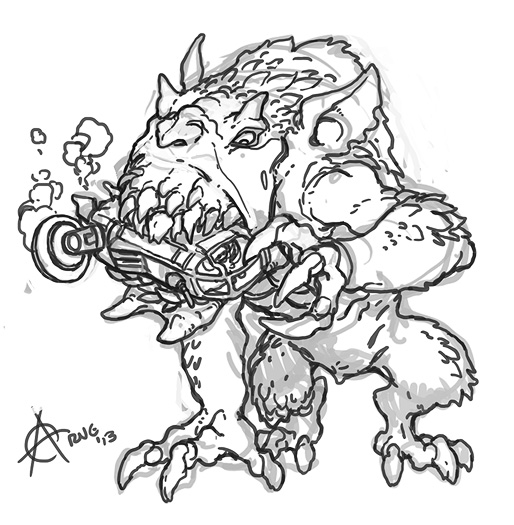 It escalated. Maybe Roger should have stayed clear of the trans-dimensional warp conduit.

Map character test. - I don't think these work, they're too detailed. I wasn't sure about which perspective to use. GB resolution stuff has the advantage of being so small and abstract that you never really notice whether your guys are properly equipped, are drawn in an odd perspective or scale, have strange leg animations, etc.

One solution could be to use a vehicle for world map travel, but that doesn't work well in towns where the characters need to be shown after all. Also, towns with no people in them might look dead and stale... unless perhaps a zoomed out solution is used (cute small people and vehicles). But, vehicles sort of distract from the guys-on-foot combat mechanic.

Iso test. - Doing just two isometric walk frames is the simplest option (well, four, which can be mirrored to make left/right facing frames). A standing frame requires a bit of extra work, but it can perhaps be snuck in as a mid-step frame. The world map would be using a different terrain scale than indoors/indungeon.

The greedy Druuge could actually be used to explain (better than most RPGs) why the heroes, who are saving the world, still has to pay for stuff.

Gameboy style test I - A Spathi town hidden in the mountains. A Druuge tower city to the south-west.

Gameboy style test II - Random encounter screen mockup. Unsure whether there'll be multiple encounters. Would be interesting if terrain in BG was based on the map tiles ahead, but then I'd need to do extra building and town gfx for this new perspective...

Here's a list of GFX that I'd need to do for this project,

Some special NPCs might have big portraits adjacent to their talk box.