I like strategy games and simulations a lot, so I'm not too happy about the decline of PC gaming. Maybe a change in player demographics (or a perception of their susceptibilities) is responsible too.

I found out recently that there was a Japanese version of Mega lo Mania. It had some new graphics for the God-faces and a new intro and extro, but it was for Genesis/Megadrive and is much less playable than the Amiga version where you can use the mouse. Anyways, I had this idea that the Gods push to establish their favourite race on the planet (rather than humans with differently colored clothes). It means a lot of art assets though as everything gets multiplied by 4. 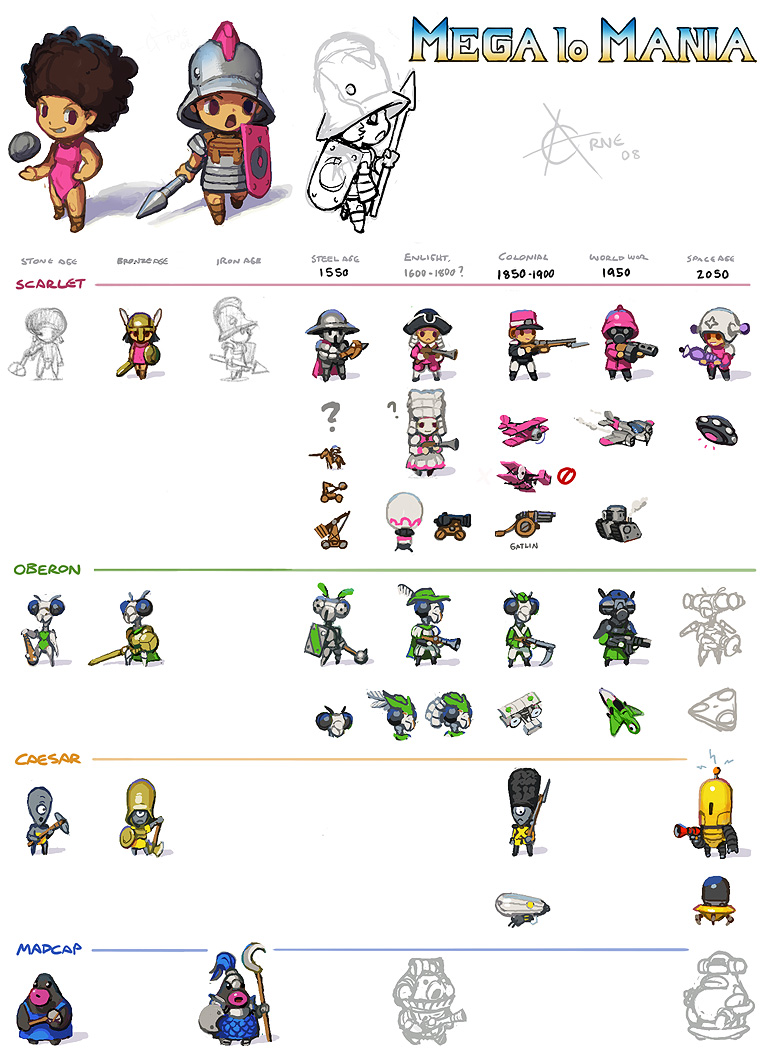 There was a MlM 2 in the works once, but it got abandoned after a few weeks. MlM was developed by Sensible Software who used the Super Deformed style in a lot of their games. Reference: Sprite sheets: http://eab.abime.net/showthread.php?t=19661 Video: http://www.youtube.com/watch?v=jBVDbTT0kzU

Pretty boring piece. Shadow of the Beast doesn't seem to be much of a game. I didn't play it back in the day. It's too busy being graphical. The animations and enemy patterns are stale and lazy. The monotonous running and punching... could be fun if the kinetics and animations made you feel powerful. 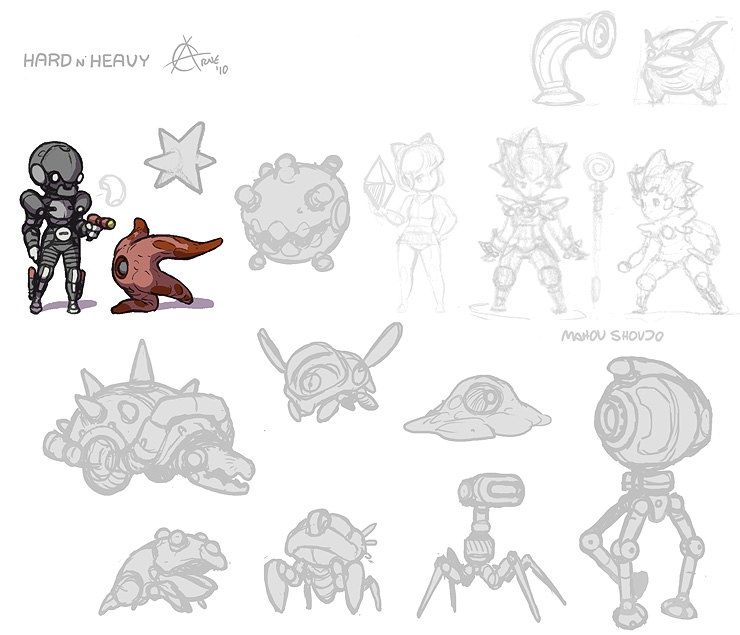 Hard and Heavy was originally a Giana sequel. Due to Nintendo's objections, the game was probably reshaped a bit. Still, you'll be able to spot quite a bit of stolen sprites and tiles in the game (Metroid, Kid Icarus, etc.). Reference. 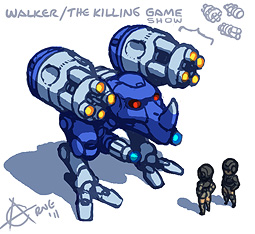 I quite like the design of the mech in The Killing Game Show. The levels and enemies are are kind of nonsensical though. Walker has little army guys that you can shoot at. It would be fun to combine the two. Maybe throw in some Choplifter, Wings of Fury, Gods. 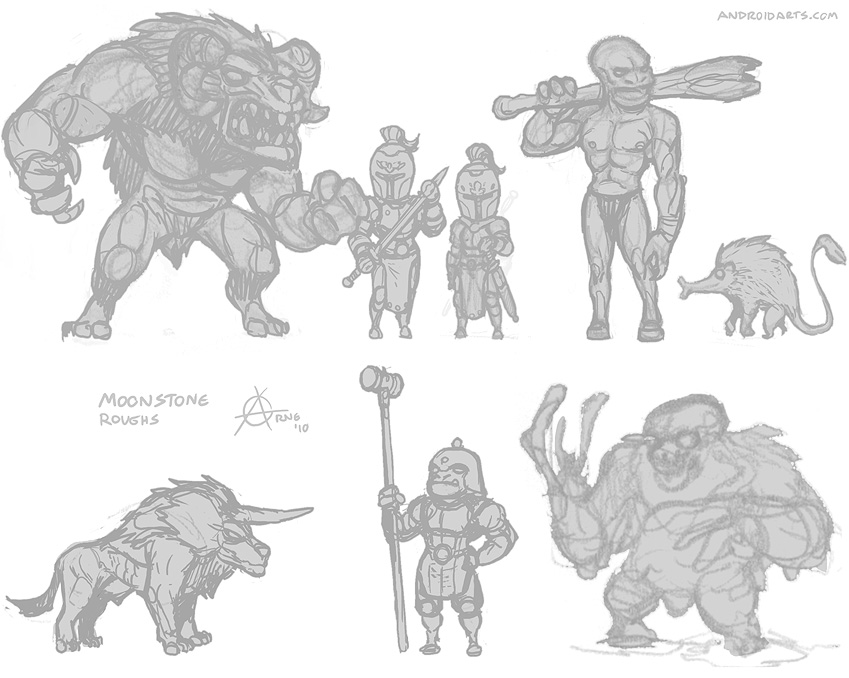 Moonstone, I wish you had a sequel and more Barbarian'ish parrying and sword fighting. And the rubberbanding was stupid. Picking up more items made the enemies appear in greater numbers, iirc. Those swamp things scared the living shit out of me every time. It didn't matter that I knew they were coming. The game was flawed in many ways, but it's unique, still. Moonstone was based on a board game called Dark Tower apparently.

I wish I had discovered the atmospheric exploration game Exile when I was younger. I'm not sure if it's because I'm older, having seen a lot of games, knowing how they're made, but the magic feeling when playing games is now almost gone for me. Similarly, I no longer look at the roadsides for strange mechanical devices which I can use to build robots. My imagination has been tamed, perhaps. However, when I found Exile I got a glimpse of that old feeling... finding strange looking sprites which could be fantastical things.

I have some new stuff which I need to upload. Baak! 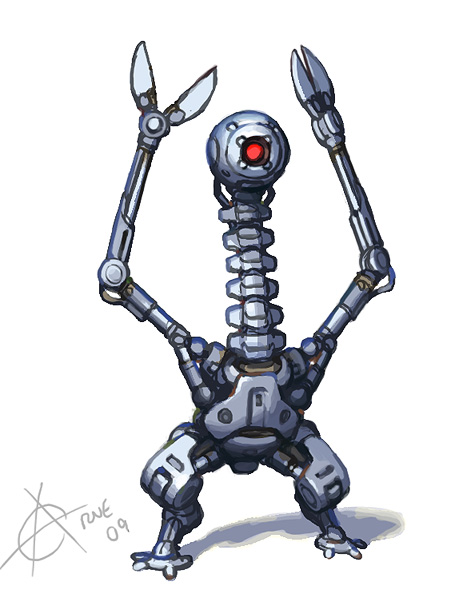 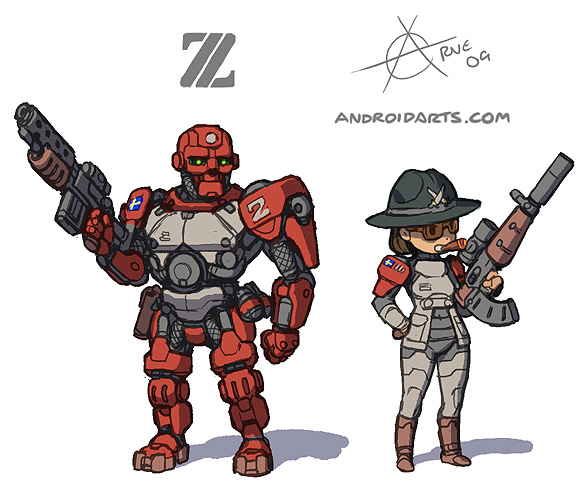 Since the sprite and 3D version of the robot looks different, I took the liberty of picking the cherries.

The 3D guys had a nasty solid red (or whatever color) look, making them look like plastic soldiers. I decided to use the light gray (looks kind beige) torso color from the sprite to break up the monotone. The ribcage area (and perhaps the whole chest) still needs some work.

The eyes are green on the smaller sprites, but not on the portraits. I went for green eyes even though it's cheap (glowing cool eyes) and not as expressive as the organic eyes in the portraits. I thought it would be a good way to mark the face with a special eye catching color contrast.

I did draw some inspiration from the 3D designs. The belly disc was fun and serves to break up the red armor plating theme. It suggests some kind of core / engine.

I was trying to keep the 90 and 45 degree angles which are often used in the pixel art.

The darker piston parts are intended to break up the red with something of a darker value.

The rifles and grenades are based on the designs in the game. The head is just some kind of average of all the different portraits in the game though.

I made the drill sergeant a human because I like to add a familiar scale reference. The design is pretty much made up by nonsense and needs some work. The torso clothing splits in two around the abs, just like on the 3D robots. The beige color comes from the drill sergeant. The rifle is a modified version of the sniper rifle in the game.

The sketches are the exploration thumbnails which I haven't explored further, but I wanted to try and go for light, medium and heavy designs.

I have a Starflight page.

Here's a Jetpack lass. Jetpack is an old DOS game. I have never played it. 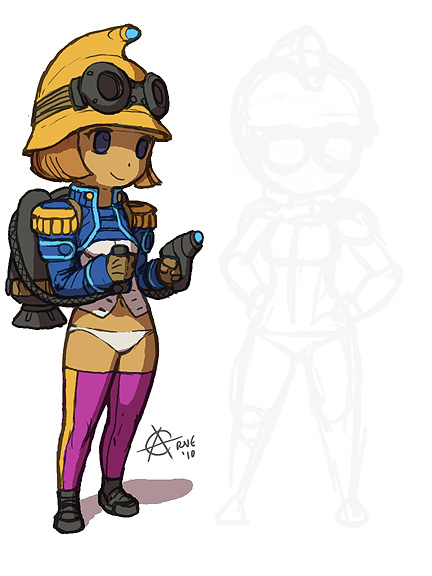 This is an old Japanese game with interesting game mechanics. It might be based on the Starship Trooper book and its Japanese covers and surrounding toys. Check out Hardcore Gaming 101's article on this game. 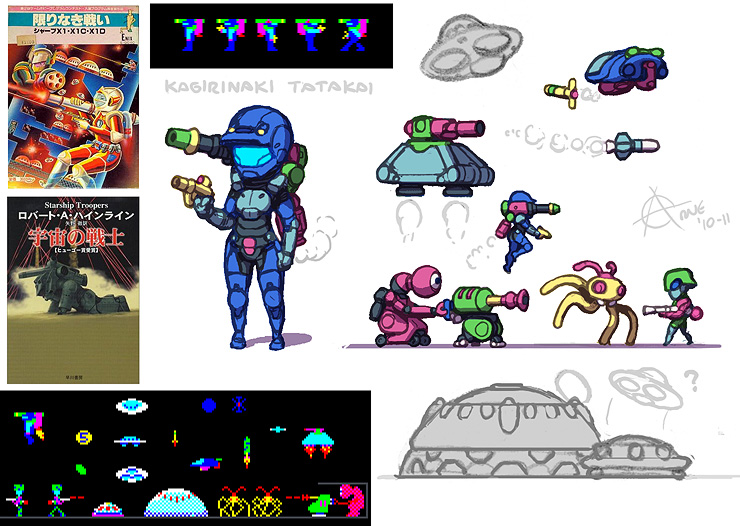 I was always more of a TA guy, but SC had its moments. The sprites didn't quite feel like the characters in the video sequences, so I wanted to interpret them. This image is still a WIP and I'm using ref. Sometimes I keep the ref on the same canvas that I draw on. It's a good idea to get ref showing many angles, animations, etc. This way the average look can be approximated.

The Dragoon was fun to use because I don't like micromanaging and prefer 'fire and forget' units. I tried to match it primarily with the sprite which looks quite bulky to me. The Goliath seems to be a mix between ED-209 and a beetle (I liked the beetle look). Messed up the feet placement. The Zealot appears to have a long alien skull of some sort on the sprite. The details on the body are kind of haphazard, but since I didn't really like how the Zealots looked up close so I wanted to try a different approach. Since the units are seen from above, I chose to put some brown team color on the shoulder arcs.

The Marine is one of the best designs in StarCraft. I think the red version appearing in the Ghost trailer is very nice looking with the simple barrel arms flowing nicely into the shoulders. I didn't really do much redesigning with my version. 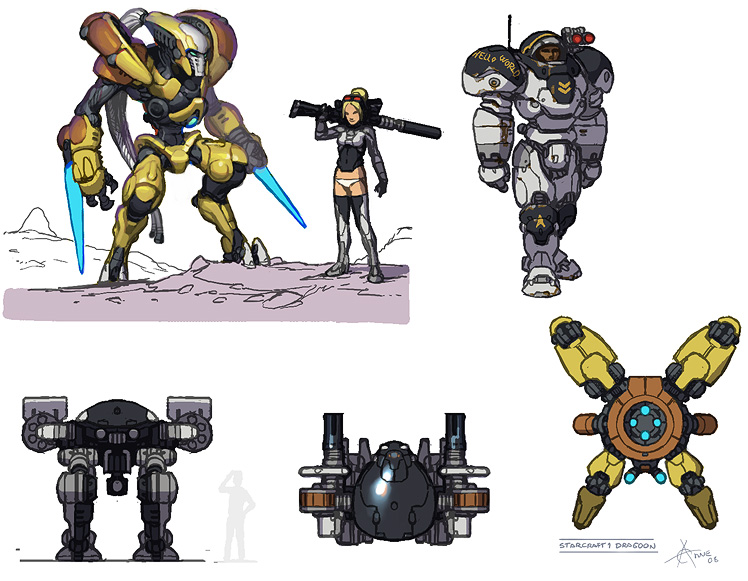 This Dragoon based on the old sprite in terms of general color masses. I'll have to do something about my Kerrigan design since I don't like it. Edit: Updated 2011. Changed the Dragoon around a bit too. 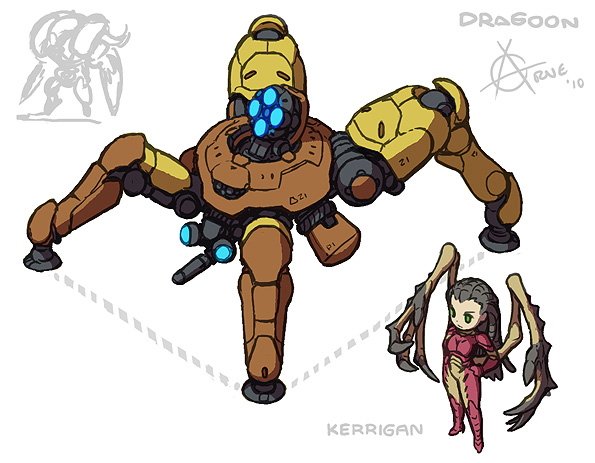 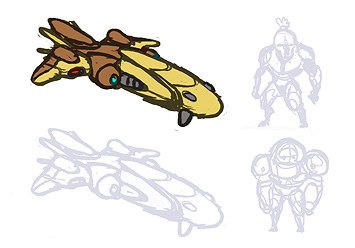 After having finished the SC2 campaign, a brainfart like this was inevitable. There's no robot species and I like the Borg-like adjunct, so, I played around with the idea of a new faction.

Yeah, that's a Goliath. I like their beetle look in SC1. I was thinking they could have these transparent black canopies, a bit like Alien's head, or those old Bionicles.

Here's my take on some of the new SC2 units for HotS, not yet released, writing this. 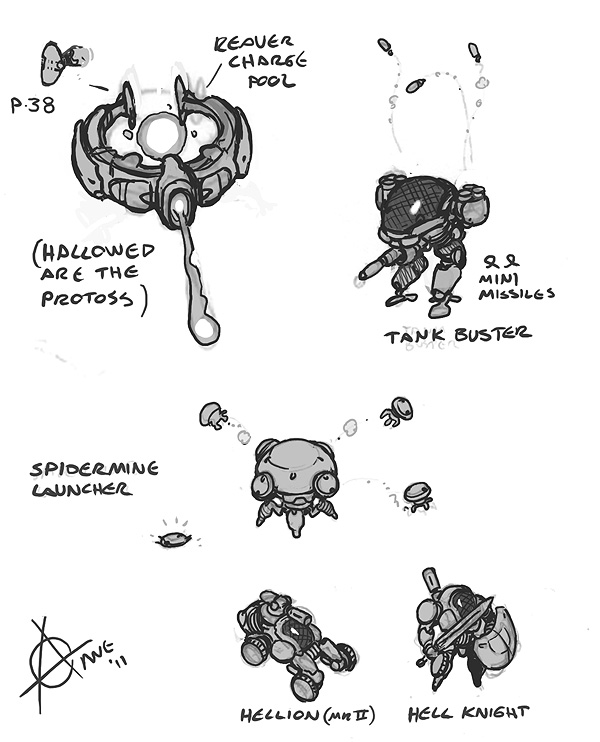 Old stuff, new stuff not scanned yet. Actually, you might see some of the new stuff at the bottom of my Mecha game page, but I'm filing off the serial number, so to speak.

Kawaiik is my take on the Quake setting. Also check out my Tribes page for some Gloom sketches.

I was trying to do some of the Unreal characters, but they give me absolutely nothing to work with. Nearly all have the same big-hand-feet muscle bodies, same silhouettes, and some variation on the head and minor texture bits. Normally I try to find some prominent feature then I exaggerate that and use it as a theme for the figure.

These were the only characters that I felt like I could do something with.

Just poking fun at the new game (it's a paintover of a screenshot). It looks like a scene from a sitcom :o 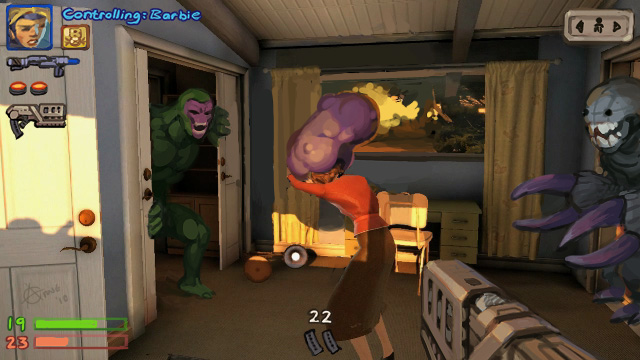 I have an X-COM page somewhere. 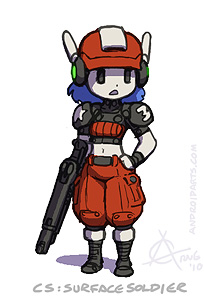 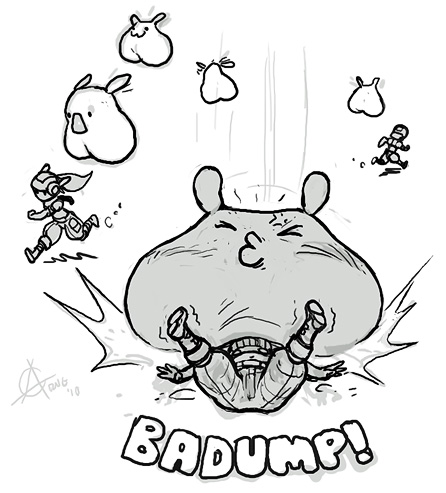 I liked the idea of a robot war on the surface. I didn't play through the entire game so what actually happens in the game is still a mystery to me. 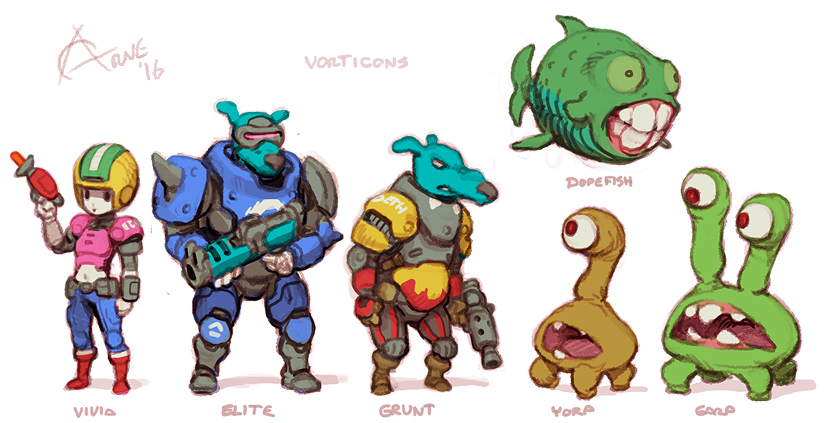 I had some ideas for an id multiverse, but typing this I have already forgotten what the plan was. 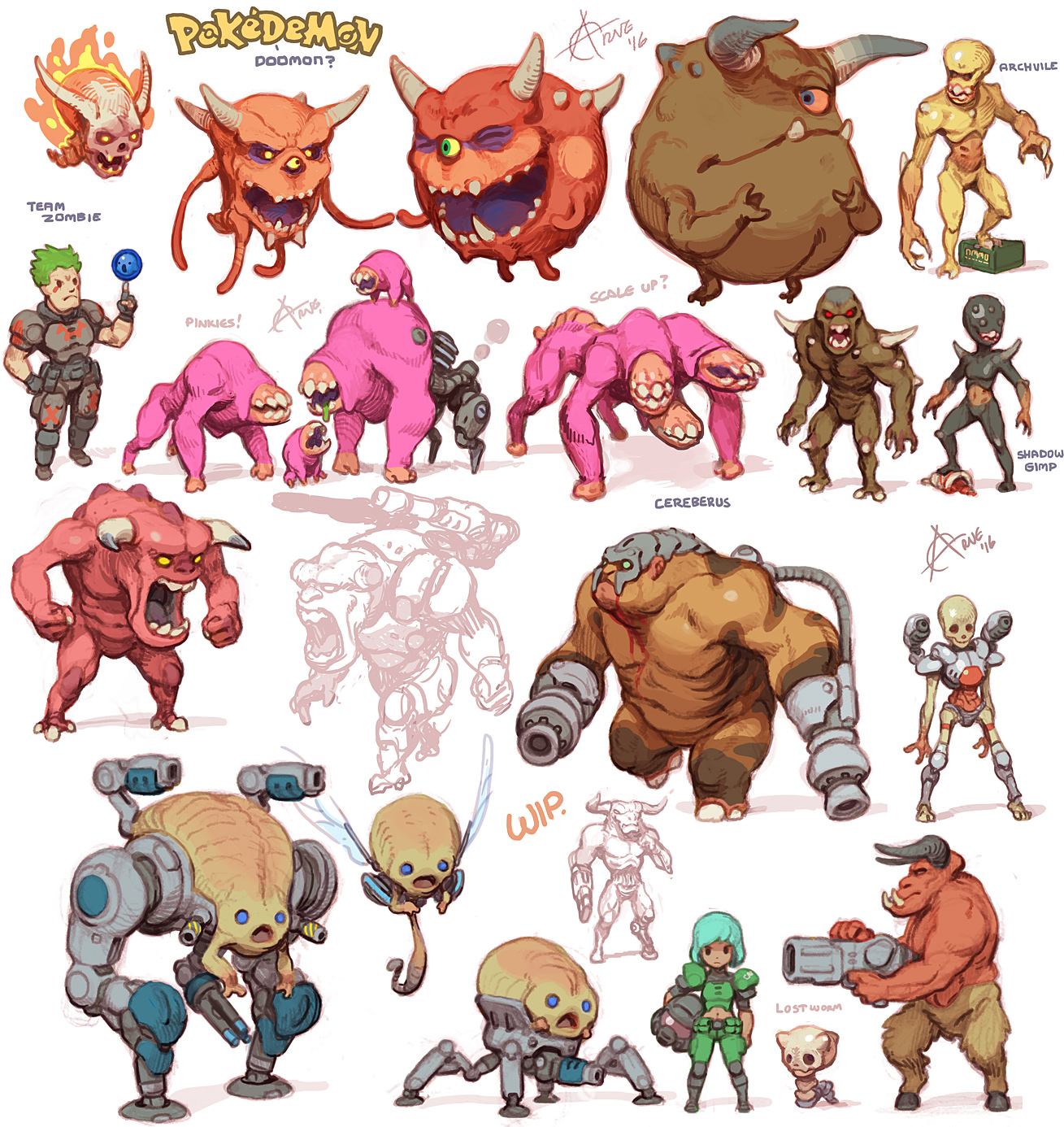 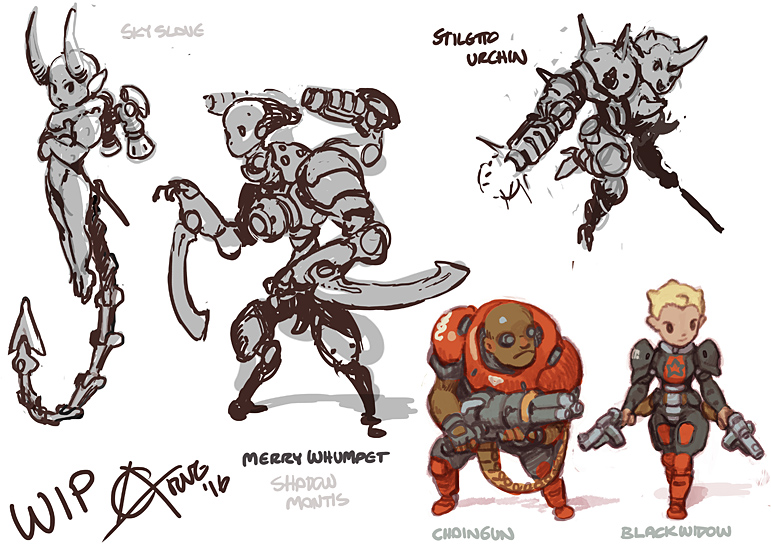 It's always fun to make several versions of the same monster. Borrowed a bit from Serious Sam. Also came up with some heroines/villains/mercenaries perhaps for Kawaiik project. 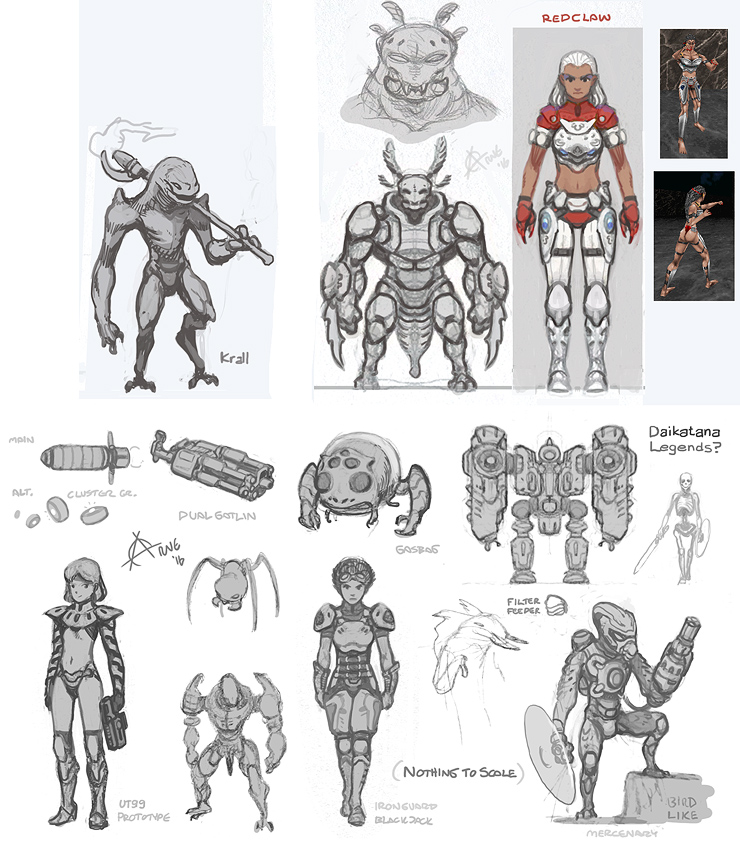 Assorted roughs, done while browsing the cutting room floor's UT page. 2003 went nuts with characters, some were fun (Lilith) but they were a bit too greebly overall. Coming from Quake and Tribes, I didn't like a lot of the slower FPSes which followed after, but UT99 had something special which I felt 2003 missed. I think I prefer UT's alt-fire weapons over the single mode fire ones in Quake and such. The (original) Unreal dual gatlin gun looks very unique, and from 2003 I like the pulse rifle. UT99 overall has a nice balance of realism and chunkyness to most weapons but the gatlin gun looks too generic.

UT99 skin paint-overs with silhouette tweak. I'm still terrible with faces, but I think a weirded out face fits a FPC character better than a calm one. 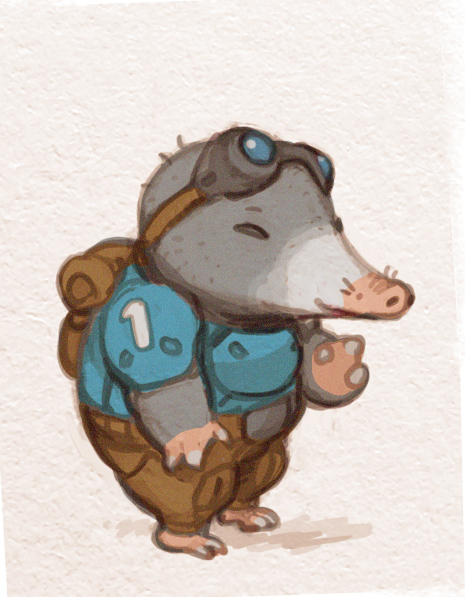 Monty Mole in one of my go-to armour designs. 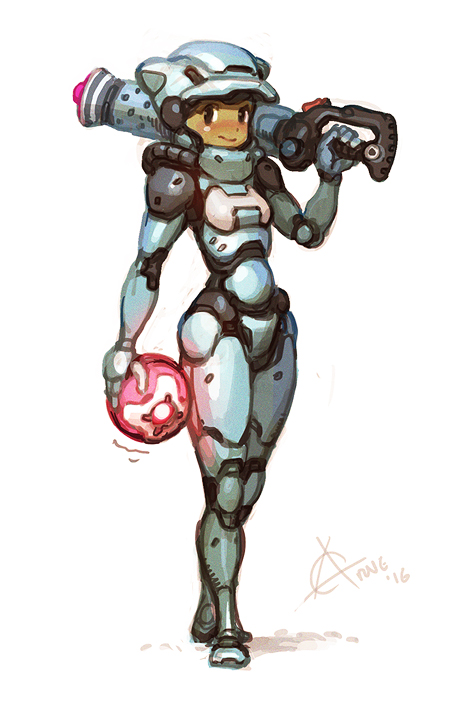 What is Bomber Queen doing here? Doesn't she have a page of her own? I think this design is a bit too greebly/busy, but I like something about it anyways. It's somewhat based of the ingame sprite, with some exceptions for face and proportions. 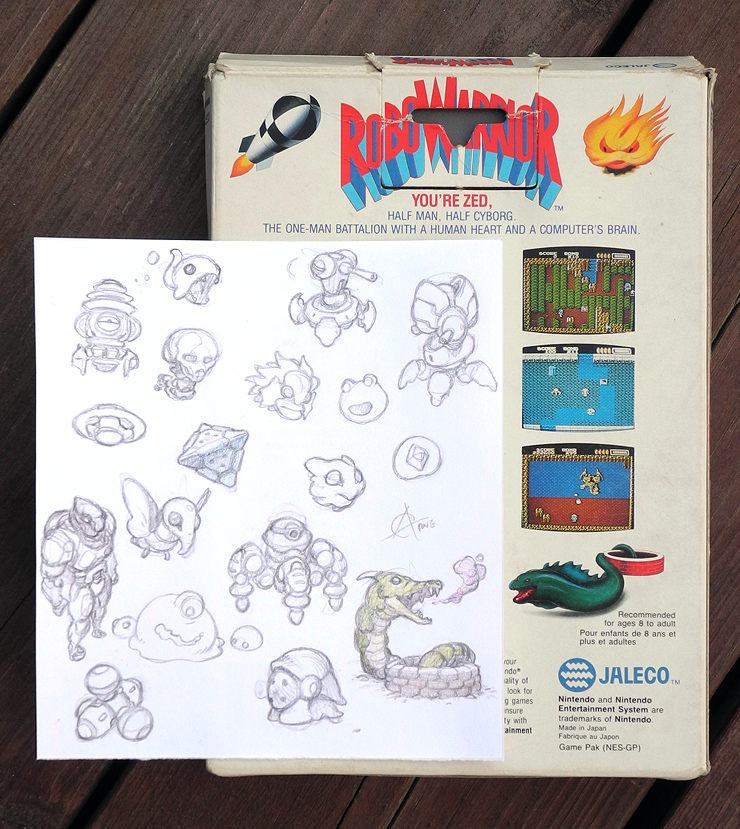 Thumbnail sketches for enemies. Technically, Bomber King (Robo Warrior) was out for computers as well (MSX I think).

Sprites based on my thumbnails here.

Not a game, but a TV show. Would've loved to watch it as a kid. The mechanical (robot/vehicle) elements were so cool. I like it better than the later ones. What if it was a space opera? 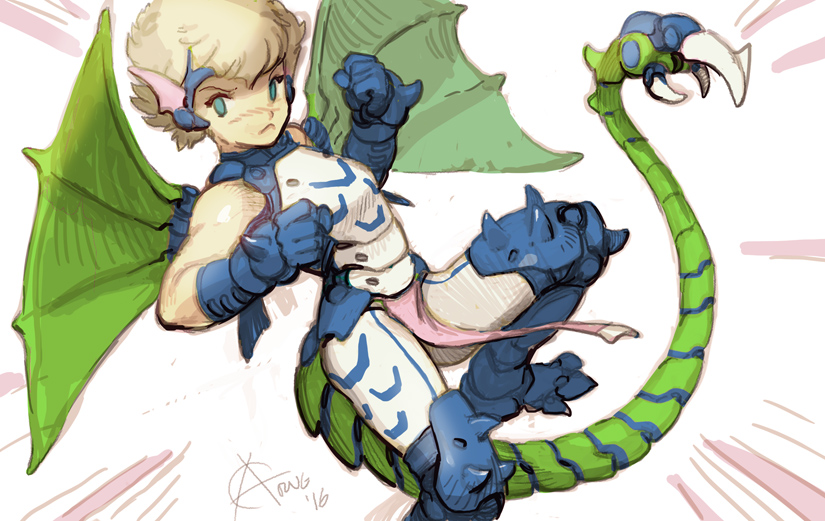 Been wanting to do my own version of Chaos Angels for some time. It's a dungeon crawler with girl-monsters, very 80's manga in style.